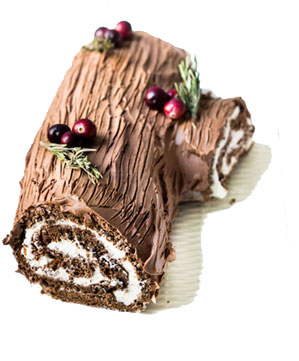 At this time of year you see so much lovely food in the shops and in the ads on TV. One ad frequently featured is for a chocolate yule log. I began to wonder why and what the traditions are behind this modern chocolate covered cake, usually decorated with bits of fake holly and sprinkled with icing sugar snow. What was a real yule log?

Yule or Yuletide is the old name for the Winter Solstice. Looking back, its roots are possibly in the Iron Age and burning a yule log at the solstice certainly continued into medieval times. The yule log tradition may have started in the Nordic countries where at this time of the year the days are very short and the dark nights long. The belief was that feasts and celebrations involving fire would bring light back to the world… as it slowly did.
The yule log was an important part of the celebration in the home. A large log would be decorated with holly and pine cones....sometimes sprinkled with wine and salt to protect against evil spirits.
In Scandinavia, larger gatherings of people would meet in longhouses. Longhouses had walls of peat or wattle and daub, a thatched roof and floor made of pounded earth. At one end the animals would live out the winter, at the other there was a storeroom and workshop whilst the centre of the house was a communal living area. In its centre was a great stone hearth to provide heat, light and a place to cook the meals. It was on this hearth the yule log would be placed. So it’s not hard to see why, in the depths of a long, cold winter that the lighting of the yule log was a reason for feasts and celebrations. 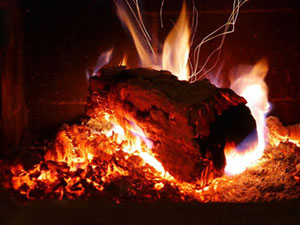 In these big houses it wasn’t just a log that was lit but a whole tree! It was carefully chosen and ceremonially brought into the house. As much as possible of it would be in the hearth with the rest of the tree sticking out into the room. It had been lit from the remains of the last burning log which had been carefully saved for this purpose. It was said to protect the house from lightning strikes; very much a concern in flammable dwellings! Each day of the 12 days of Yuletide this huge tree would be kept burning until the 12th night, when the feasting began.
Well, that explains the traditions behind the yule log but not why we have a chocolate version today! It is possible that edible festive yule logs, without the chocolate, were a tradition at the feast but what we know as a yule log goes back to a Parisian patisserie. During the 19th century he invented a wonderfully rich chocolate confection, elaborately decorated, which he called a Buche de Noel which translates to Christmas Log.
Enjoy!