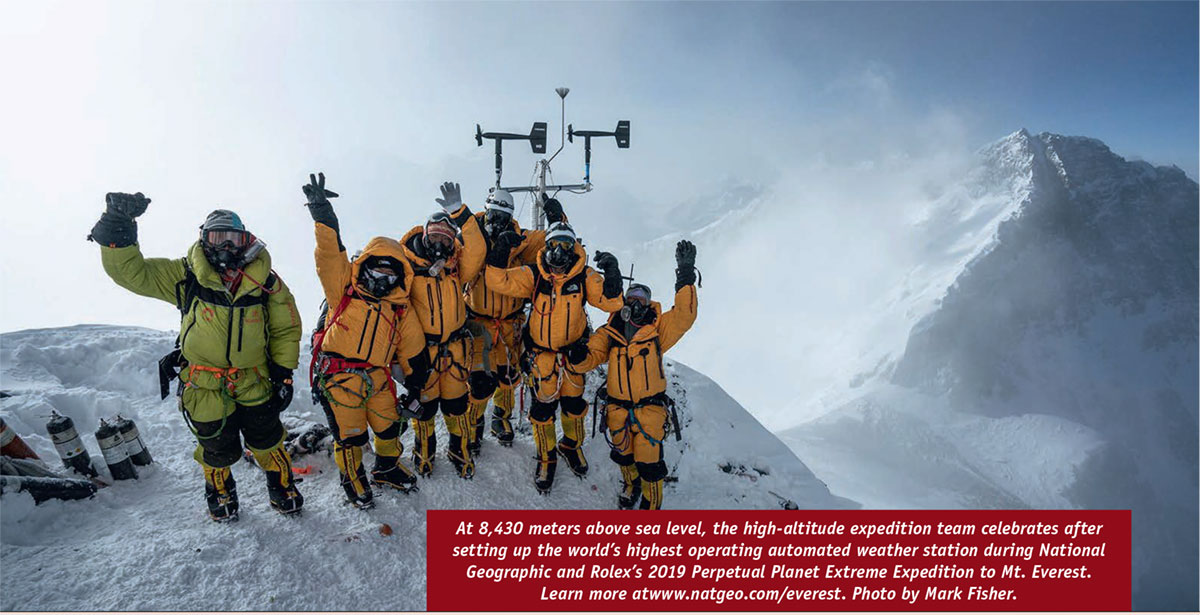 I recently had the good fortune to meet with a Barrow resident who was lucky enough to be able to fulfil his sense of adventure alongside his job. Tom Matthews is a climate scientist and earlier this year he was part of a team that installed a weather station on the top of Mount Everest - well, almost!

Tom grew up in the village of Croxley Green near Watford, Herts. It’s not unlike Barrow in that it’s surrounded by countryside with woods, a canal and a river. It’s where he played as a child enjoying the outdoor life. As a 17 year old he had the opportunity, through a company called World Challenge, to visit Ecuador. Through this company he was offered the chance to plan, prepare for, and undertake an expedition to a remote part of the world; he chose Ecuador. It involved raising money, planning the programme, which included a trek, some project work, and doing the type of things someone might do in a “Gap Year” but all in one month. The emphasis was on learning about far flung corners of the world. He found being in the rain forests and the mountains of the Andes very exciting so his choice of degree at university had to be Geography.

Loughborough University is where Tom studied as an undergraduate and where he later gained his PhD. This involved pursuing his interest in the study of the weather. After finishing his doctorate he worked as an academic in Ireland for 18 months before doing a three year stint lecturing at John Moores University in Liverpool. Tom returned to Loughborough in July 2018 where he lectures in Climate Science. Tom’s work involves studying the weather at high altitudes and installing weather stations. Through this work he was approached by National Geographic for his knowledge and expertise. Thus he became a member of the team to transport and install weather stations in the Everest region.

The journey began in January 2019 when the team flew to Lukla Airport in Nepal, then they took a two-week hike to Everest Base Camp. In January the camp is completely empty but the group had the opportunity to experience low temperatures, to acclimatise and to practise climbing skills, including rope work. They also looked at some of the sites where they would be installing the weather stations.

The expedition properly began in March this year when the group returned to Nepal. Within a month they were at a point where they could go higher up the mountain. When they arrived at Base Camp they were astonished to see the change since January as it had grown to the size of a small town with hundreds of tents strewn across the glacier.

Tom described how a typical ascent of the mountain progresses. After a few days at Base Camp, at 5,300 metres, you then set off for Camp 1 at 6,000 metres, then on to Camp 2 at 6,500 metres. This is a large, relatively comfortable camp with big tents where you can eat your dinner at a table! Camp 3 is a very basic camp on a very steep slope so you don’t stay there for very long. The final stop is Camp 4, at 8,000 metres, where you also don’t stay too long, as it is from here that you make your final climb to the summit. So it is quite an ordeal for any climber let alone someone there to do a job and having to carry extra equipment.

The scientists installed four weather stations at various points on the mountain. When the day for their ascent to the summit arrived they set off at midnight although many other teams had begun their attempts, unusually, six or seven hours earlier! Due to the poor weather in the spring the number of ‘summit’ days had been reduced so there were huge numbers of climbers attempting the summit that day. This resulted in a massive queue waiting to move up the mountain. At that altitude it is not to be recommended! 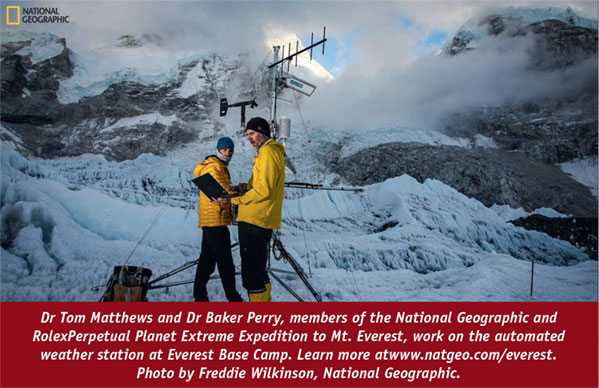 The Sherpa guides advised the team that to remain in the summit queue was dangerous. A decision was taken to set up the final weather station at a point on the mountain called, “The Balcony”, about 400 metres from the summit. Tom, at this point, was able to take time to look around at the awesome views across the mountains with China to the North and Nepal to the South. The summit ridge seemed tantalisingly close from this perspective. It was a little disappointing not to get to the top of Everest but the highest weather station in the world was safely installed. Now all four stations in Nepal are working, plus another in the nearby village of Phortse, and all are collecting data as you read this.

When I met Tom it was a year since his Everest adventure had begun. He’s continuing his work at Loughborough University and busy planning his next expedition to Ladakh’s mountains in Northern India. The peaks, where weather stations are to be installed, are a bit smaller, 6,000 – 7,000m. I wish Tom every success with his research, his future journeys and a huge thank you for sharing memories of his epic trip.

If you would like to read more about Dr Tom Matthews and his Everest journey, see National Geographic, ‘World’s Highest Weather Station’.