I always look forward to the first Saturday in December, knowing that is when the Christmas lights are switched on. They start at our lovely Christmas tree on Jerusalem Island and go along High Street, Church Street and North Street. The village is transformed into a twinkling wonderland and everyone begins to feel the Christmas spirit. 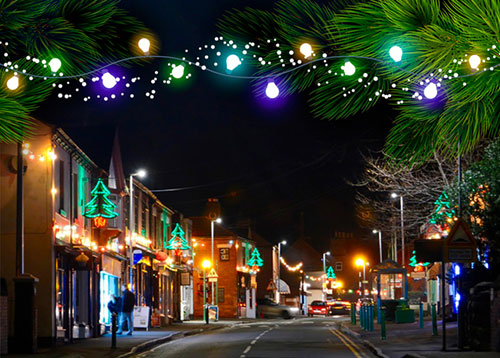 Of course the transformation doesn’t happen overnight; Mitten Electrical has the task of installing the lights. Dave Mitten has now retired and his son Pete is in charge. They usually start at the beginning of November and it takes three men approximately two weeks to complete the job. Speaking to Alex, who has been involved with putting the lights up for five years, I learnt that there are approximately 1,000 light bulbs involved, and at times, when it is icy, it can be quite hazardous going up and down the ladders. Thankfully there have been no accidents but there have been times when little children think the men are Santa’s helpers. Oh to be young and innocent!

In the past it, has been great fun when the countdown for the switch on has been done but nothing has happened and it has to be repeated. But now there is a clock which operates via a satellite. The electricians set it, then the clock is handed over to whoever does the countdown. Last year to the delight of the crowd it was spot on. This year the switching on of the lights is on December 7th so see you there. Let’s all get lit up!