where does the housing need come from?

In response to the resident’s letter (home page), the Barrow Voice editorial team looked into a range of questions about housing need and
provision, asking economists, local authority representatives, and commercial enterprises in an attempt to find some explanations.

What has caused this housing need? It’s a complex issue with no single cause, but the following are just some of the issues that could have contributed:

Ian Mulheirn, an economist at the London School of Economics, argues that house prices have put home ownership out of the reach of many of the local people who would hope to buy. House prices have doubled in the last decade but during this time wages have remained relatively static. It appears that new build estates do not seem to be offering homes for local people or first-time buyers unless they are lucky enough to have help from an inheritance or relative. 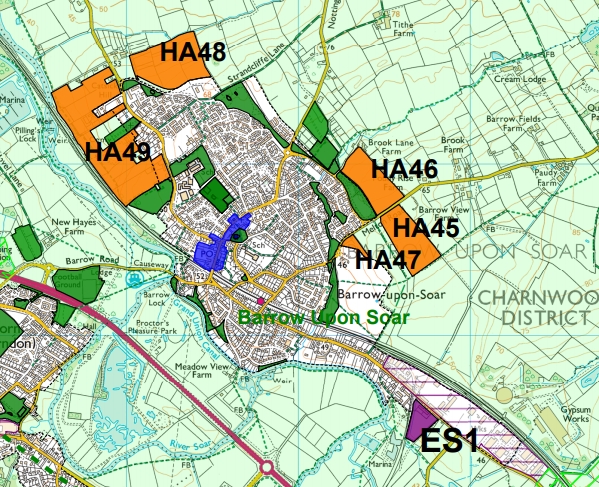 Having considered this, it’s worth having a quick look at the proposals in Charnwood Borough Council’s (CBC) draft plans and consider any benefits which could be gained for the village.

CBC’s plan is currently only in draft form but over half of its 17,776 homes will be built in Garendon Park (Loughborough), Broadnook (north of Birstall) and Thorpebury (north-east of Leicester).

The map (right) is taken from CBC’s draft plan and shows areas around Barrow where additional housing is proposed, including the areas of concern of the resident writing to Barrow Voice, which are shown as orange areas HA 45, HA 46 (Gladman’s interest) and HA 47 (next door to the Poppyfields development). The blue area indicates the centre of the village, designated as the service centre and green areas are planned to be left untouched.

We can see that these proposals would have a big impact on the size of the village and on the open space around us through which many villagers currently walk, cycle or horse ride. The proposals include an additional 210 pupil primary school. If these proposals do go ahead, what benefits could they bring to the village? The plan would require developments to provide, among other things:

The parish council has just completed a public consultation about what residents feel is important to them (results can be seen on the parish council website: https://www.barrowpc.org.uk/uploads/bpc-2021-survey-results.pdf). The council, on our behalf, can make recommendations for how the financial contributions that developers have to make in accordance with the plan could be spent.

The difficulty with building any new estate is that it involves many different authorities. The government sends a directive on numbers, the Borough Council incorporates this into their planning, but Severn Trent Water Authority has a statutory obligation for drainage and sewage; the County Council Highways Department is responsible for road networks and pavements; school provision comes under the remit of the County Council; Clinical Commissioning Groups (CCG) are the ones for health provision; the station is owned by Network Rail and bus services are deregulated. Responsibilities for car parking are shared between the County, Borough and Parish Councils. However, all of these issues are considered by the Borough Council through the process of determining planning applications.

We asked Charnwood Borough Council for their comments about housing developments in Barrow and what the Local Plan is.

For example, the Local Plan identified the level of housing needed to unlock a new £4.6m primary school in the village. This school will help meet need and will be delivered through the County Council. Secondary places are being considered through potential expansion of Humphrey Perkins. Healthcare provision relies on a number of factors over many years, including the availability of GPs. The Local Plan is a starting point for understanding likely future demand, allowing the CCG to make long term plans and work with Barrow Health Centre to maximise the use of developer contributions. Sustainable transport is another example. The Local Plan aims to give people alternatives to using a car and contains a specific £1.5m plan for Barrow which includes improving pedestrian and cycle access to the station and junction improvements.

Elsewhere, the Local Plan contains 12 policies relating to the environment and a further six considering climate change. As one example, it requires a 10% biodiversity net gain with new development. This means wildflower meadows, urban woodland, sustainable drainage systems and more may be introduced.

Often such public infrastructure will be supported with contributions from developers. A recent example of contributions received in Barrow is the more than £590,000 attached to the Strancliffe Hall development in Cotes Road. This includes money earmarked for education, library, recreation space, and bus passes.

There have been four public consultations in relation to this Local Plan. The latest ended on August 23rd. The Borough Council expects to submit the Local Plan, plus representations received, to Government in October.

From there, the Local Plan will go to an independent Planning Inspector for examination in public. It is hoped that the Charnwood Local Plan will be adopted in October 2022.

Whatever your views and opinions, you can see the CBC Local Plan and talk with your local borough councillor: Cllr Pauline Ranson: 01509 416928 cllr.pauline.ranson@charnwood.gov.uk or Cllr Hilary Fryer: 01509 620938 cllr.hilary.fryer@charnwood.gov.uk