It’s lovely to be able to report on village activities which are taking place once again. The Bishop Beveridge Club is open; village and garden trails have taken place; there’s been a fantastic Scarecrow Festival; and plans are underway for two days of crafts and entertainment in October and the Street Market and Switch-on of the Christmas lights along with the Christmas Tree Festival in December. We had an exciting flypast of two World War Two aeroplanes to celebrate another blue plaque for the village but the big news for the Barrow Voice is that we now have a Facebook page and social media presence: @BarrowVoice 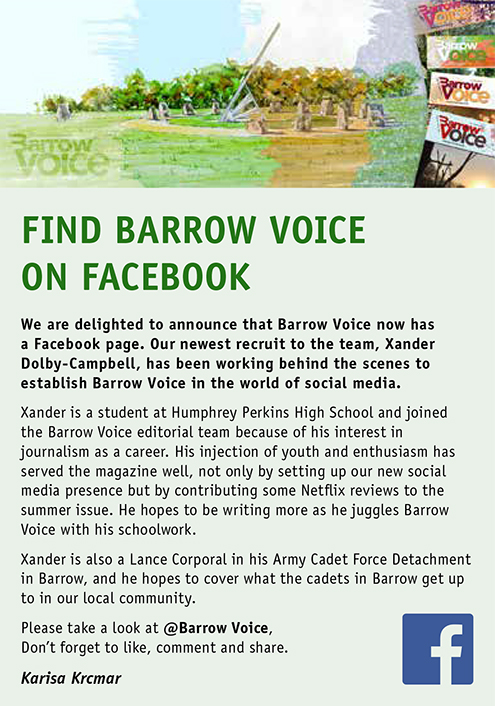 As the nights draw in and the weather turns cold and misty, we have three short ghost stories based on events in three different Barrow houses. I took the front cover photograph (of the carved pumpkins) from the canal last year and we have an article on dowsing, which may feel a bit mystical to some. Crows may seem sinister birds, but we have a heart-warming story of Liam and Hooch.

David Dipple, known to so many Barrow residents (whether that’s as having being part of his school recorder group, cricketing team or just seeing him at village events as the village crier), is leaving the village and one of his many ex-recorder pupils bids him farewell and all the best. One of the oldest shops in the village W.H. Graham on Beveridge Street has now closed, as has the Post Office at the garage.

The village moves forwards as plans for more housing development are debated and we cover some of the issues arising there.

Letter to the Editor

The Government has said that 17,776 homes need to be built in Charnwood between now and 2037. Charnwood Borough Council’s (CBC) draft local plan (which you can see at: https://www.charnwood.gov.uk/pages/charnwood_local_plan_2021_37) suggests where and when these homes will be built.

A resident of Barrow has written to the Barrow Voice expressing his concern about the plans for approximately 700 houses to be built on the edge of Barrow. He says:

“Barrow is categorised as a ‘service centre’ or the surrounding area including the Wolds villages. This means that the village should have sufficient infrastructure to cater for a growing local population. For example, there should be adequate provision in the schools, health centre, shopping, parking and public transport.

However, the Government’s latest proposed legislation will allow swifter and less consultative applications for planning permission and it has also changed the parameters for future housing availability and consequently is vulnerable to speculative house building proposals, like that from Gladman (a company describing itself as having “over 30 years’ experience in obtaining planning permissions, we are the UK’s most active and successful land promoter.”). That means they seek planning permission for areas of land that could become available for building.
Gladman currently has two live applications with CBC, one either side of Melton Road, which are for a combined 265 homes and I believe Barrow will be subjected to many more house-building proposals around the outskirts of the village.

Barrow is categorised as a service centre, and as such is likely to become a target for more similar proposals. I do not believe that Barrow has the infrastructure to be able to take the increase in housing.
Hall Orchard Primary School already has ‘mobile’ classrooms and I doubt whether it is able to expand further.
Flooding is increasingly a problem because of climate change and a decrease in land available to soak up rainfall could just make this worse. Flooding already occurs where Fishpool Brook flows through a limited culvert under the railway where the cross section can be choked and the embankment acts like a dam.

The problem with sewage was raised when Poppyfields was proposed and questions do not appear to have been addressed. All the sewage for the north east area of the village flows through an approximately 12” pipe. It has backed up already and sewage has been discharged into the Fishpool Brook and from there into the River Soar.

Traffic will increase through the village; this will be exacerbated during times of flooding when Slash Lane is closed and traffic has to queue through the village.
There are only 35 public parking spaces in the centre of the village which will put off new residents from shopping in the village and any potential benefits to local businesses.
The railway station appears to be one of the amenities which designates Barrow as a service centre, but there is no parking available and there are 40 steps to platforms with no access for wheelchair users or prams (not much of an ‘amenity’ for many residents). Many current train users park either in local residential roads or take up the limited 35 parking spaces in the village.”

(For more information about the Charnwood Borough Plan and a consideration of the need for housing,
please see the article - 'New housing plans for Barrow:')